the terrace on the sea

The more evident symbol of the city of Livorno: the Mascagni Terrace

That’s right, it’s one of the most famous symbols of Livorno, the spearhead of the Tuscan coast and maybe of all the region.

It’s one of the most representative places of the city from 1975, when the preexisting square was extenden with the wreckages of the city center, that was destroyed by the bombing of the Second World War. It was right about then, that the famous terrace took the current configuration, so sinous to be devoted to a composer of Livorno known all over the world: Pietro Mascagni.

A panoramic terrace, a beautiful forecourt that gives a breathtakink view over the blue open sea that matches with the light blue of the horizon. It’s one of the most suggestive places of the city where you can take a pleasing walk ore, if you’re fond of photography, spend long hours taking photo shoots of unique scenes.

The floor is a chessboard of about 8.700sqm, made of more than 34.000 white and black tiles and of almost 4.100 small columns that keep it apart from the sea. At the centre, there is an elegant round temple, used as a gazebo for the music, that was rebuilt ad the original after the distruction of the war. 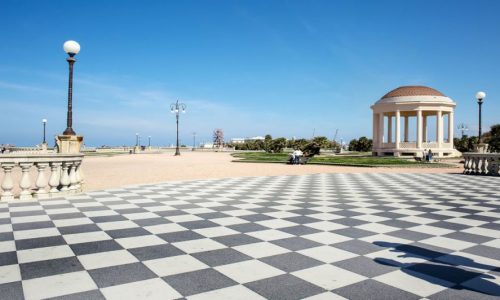 It’s a terrace of a huge emotional and scenic impact, that becomes even more fascinating if you consider that many invisible centuries of history are hidden beside it.

Then, it’s easy to understand why the terrace is one of the favourite places both of people living in Livorno and of tourists, the spearhead of the Tuscan coast: you just need to stop and admire its beautiful view on the sea and, in the most sunny days, even on the Tuscan archipelago.